Wildlife in Costa Rica… Five animals you will probably see if you come for more than a day.

Costa Rica has at least 228 mammals, considering the small size of Costa Rica, this represents an awesome diversity of wildlife. For example, in Texas, four times bigger than Costa Rica, there are about 200 species of mammals.

Because of the tropical complex forest, this provides numerous amount of habitat niches, many of the mammals are adapted to living and traveling through the treetops to seek food, dens, and safety. 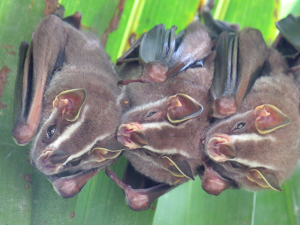 Ten-making bats get their name from the way they bite the main veins of long leaves likes Heliconias of palm leaves so that the leave droop to create a tent like waterproof shelter. This protects them from the rain in areas that receive up to two hundred inches of precipitation per year.

The tent-making bat is found in moist and wet Caribbean and Pacific lowlands. Although primarily a fruit-eating species, it also eats insects. They are normally close to two and a half inches, and you can usually find them in groups. 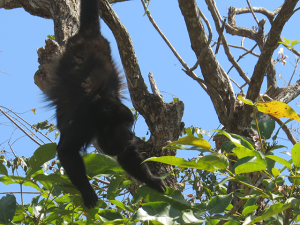 The Mantled Howler Monkey is the most conspicuous of the four wild primates in Costa Rica, and this is because of their lion-like roars. The sound can be heard up to a mile away. Adults have prehensile tails that aid in traveling through the treetops. They also provide a secure grip as the monkey reaches for the leaves, fruits, and flowers to make up its diet.

The howler monkeys live in troops of two to forty-four individuals, averaging about thirteen. Young monkeys reach sexual maturity at three years of age, the youngest sexually mature male and female in a troop are the socially dominant leaders, they maintain their dominance for thirteen to forty-eight months before being dispatch by a younger individual.

The monkeys usually feed on nutritious food or seeds, but the howler monkeys eat primarily roughage, a young leave of a wide variety of tropical trees and vines that are low in nutrition but available in great abundance.

The amazing Howler Monkeys live everywhere in Costa Rica… If there is rainforest, howler monkeys live there. You can even see them on the trees on the roads. 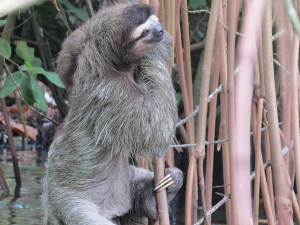 The three-toad sloth is one of the most distinctive and abundant mammals in the rainforest, Each foreleg of it has three long, curved claws that help grasp branches as it climbs.

There is a myth that sloths only eat cecropia leaves, but they actually eat leaves from at least ninety-six trees and vines, since sloths are often in dense foliage, they are not usually seen except in sparsely branched trees like Cecropia,

Each sloth eats leaves from a unique combination of about forty tree species. Bacteria in sloth’s stomach are adapted to digest those leaves, much like bacteria digest grass in the stomach of a cow.

A sloth reaches sexual maturity at three years of age and may live to twenty to thirty years. An infant clings to the mother its first six months of life.

You can find these in the lower humid areas, from both sides. Easier to spot in less forested areas. But common in places like Manuel Antonio and Corcovado. 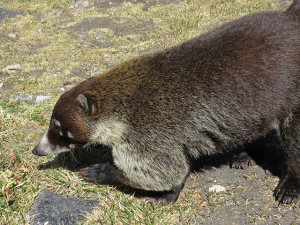 The coatimundi is the largest and most conspicuous member of the raccoon family in Costa Rica. A social mammal, it is active throughout the day and is usually seen in family groups of fifteen to twenty. Groups may occasionally exceed thirty individuals. These groups consist of young males, females, and young. Old males are typically loners. They have long, dark, furry tail, which is held upright as it forages on the ground.

Coatis can fight fiercely as a group, so they have a few predators; Jaguars, Cougars, Tayras, hawk-eagles, and boa constrictors will occasionally prey on a coatimundi. White-faced Capuchins will sometimes prey on baby coatis in their nests.

4These is the Costa Rican version of the raccoon; you may see them on the road by the lake of Arenal and as a usual sight in Manuel Antonio, Rincon de la Vieja, Corcovado. People have feed them historically, changing their social habits and hurting their health. Please don’t feed them if you see them. It truly hurts them.

Most people recognize this primate as the “organ-grinder’s monkey.” However, as with other neotropical primates, this monkey belongs in the forest, not at the end of someone’s leash. White-faced Capuchins have a prehensile tail and are smaller the howler monkeys. There are characterized by black bodies with a white to yellowish face, throat, and shoulder region.

This mammal can be found in forest ranging from dry and mangrove forest in Guanacaste to moist and wet lowland forest of the Caribbean and southern Pacific coast.

These monkeys are diurnal and feed on fruits, nuts, shoots, buds, flowers, caterpillars, cicadas, beetles, ants and baby coatis. The usually forages from the ground level to the upper level. They reach their sexual maturity at three years of age and may live more than forty years. Females have a single young at the approximately nineteen months interval.

The white-faced Capuchin are easily seen in most lowlands forest of Costa Rica.

Costa Rican Mammals are beyond the imagination, they are beautiful and live in their own world. From a tourism and viewing standpoint, mammals can be difficult to see, the dense forest is puzzle place where movement is the key, the sounds, and the colors will give you clues about where they are, and studying about them will give hints of where they can be.