With impressive landscapes, monumental trees and exotic plants, the rainforest of Costa Rica it’s a magical place where to learn about the biology of the world; with plants that can cure diseases, flowers used to make makeup colors and trees that sustain life of hundreds of species at their tops, fruits that feed us and insects of the most amazing colors and forms.

The rainforest it’s an opulent paradise that gave birth to several stories around the world: novels have been written about it and inside of it, movies favorite location for scenes and background, poems about mother nature. But beyond all that, there is the undeniable truth that without them life on Earth wouldn’t be possible as they are the lungs of Earth.

No doubt the rainforest is one of the richest locations in many ways, and here, we are sharing, from the insider’s point of view, eight highlights that you might see while visiting, and that are important to recognize:

With its 19.700 square miles (51.100 square kilometers) holds a large amount of mammals, reptiles and birds (5% of the total amount of life on Earth). Some animals from the rainforest are nocturnal, and lots of them can be watched easily in the daylight. Let’s talk about some of the most popular ones:

1.Coatimundis: The Coatis are relatively small; they are about 12 inches (30 centimeters) in their adult state, males are almost twice as large as females. They have a long tail, resembling a regular raccoon, color brown; like if they are wearing a large coat. They are omnivores; eating mostly everything like fruits, spiders, small lizards, and every eggs. Sometimes, on the road, you can see them on the forest, traveling in herds. These groups are mostly females, juveniles and babies. Whenever they are on the mating season you will see the males with them as well. But usually males are by themselves. In Costa Rica we even have a saying for whenever a person enjoys its solitude… We say is “A lonely coatimundi” (Un pizote solo).

If you happen to be as lucky as to see a group of “pizotes” please DO NOT feed them. Not even with fruits. They are omnivorous yes. But with the human intervention for easy food they get hyper aggressive and hurt each other easily. Plus, they are on the side of roads precisely because of this and they get easily killed. 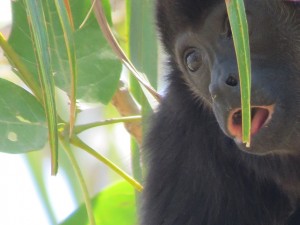 2. Howler Monkeys: When you are immersed in the rainforest, you can hear, at the distance, a howl that can travel three miles in a dense rainforest. Howler monkeys are a thriving specie that have adapted to humans in a much better way than other monkeys. They are omnivorous also, however, their favorite food are tender leaves. They have an excellent sense of smell by smelling food more than one mile away. They grow from 22 to 36 inches (56 to 92 centimeters), they live is large groups with one alpha male, a couple more beta males and several females and babies. They also eat leaves, fruits, flowers and nuts. They are quite impressive. Every now and then, like pizotes, you will see a lonely howler monkey up on a tree. They are usually old alpha males that got kicked out of their group by a younger one.

A most important thing about howlers is that if they feel in danger or feel their territory is threatened, they will attack (Capuchin monkeys do this also), either directly with branches and fruits, or simply by sitting on a branch over the “invader” and relieving themselves, so, the lesson here is: “When walking in the rainforest, never, ever, look up with your mouth open”… And no, it is not a joke. 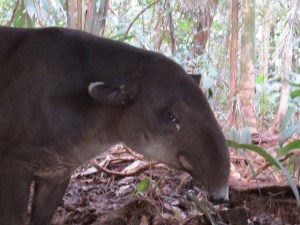 3.Baird’s Tapir: This is a hard-to-see mammal; they are large and can weight up to 700 pounds (300 kilograms), with a long snout, resembling a big pig; although, funny, they are relatives of horses. They usually live up to thirty years and are magnificent to see. You can see them, every now and then in the Tortuguero Canals when it is really rainy, as the mothers bring their offspring to safety  into lower areas and close to where boats run. As well as if lucky, you can also see them in the aerial tram, the Arenal Volcano National Park surroundings and Corcovado National Park trails. Just be careful, they can run really fast and get easy scared.

4.Jaguar: No, it is not easy to see them… But if you are extremely lucky you might. They are seen, when they are see, usually in the Corcovado National Park trails and, at the beginning or the end of the turtle season, swimming across the Tortuguero Canals. They can weight up to 210 pounds (95 kilograms), carnivores that eat smaller mammals, reptiles and birds across the rainforest… and yes, sea turtles. They can be recognized by their yellow color and black spots.

5.Toucans: They are spectacular animals, awesome shape, impressive colors and their highlight; the peak. In the rainforest of Costa Rica you may find up to six species, from the colorful peaked Keel-Billed Toucan, to a much smaller Emerald Toucanet that you may be able to see in the higher mountains rainforests of Costa Rica. They eat fruit, nuts and other birds eggs, although they have been seen attacking monkeys and other small mammals. and are usually companion by other Toucans. They are common residents of the rainforest and in silent you can hear their trill. 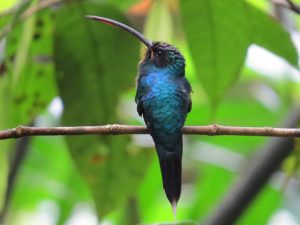 6.Hummingbirds: A little friend who we all like; they are little, move really fast, and have incredible colors, the fastest heartbeat on Earth, the fastest wing movements on Earth and whose brain is the largest of all creatures according to their weight… The hummingbird, 54 species of them can be found in the rainforest of Costa Rica. They are fantastic targets for bird watchers and the best for photographers… If they can catch them!

7.Sloths: Of course! We could not miss them! They are so ugly they are cute! They are dirty, but none notices. They are incredibly slow at times, but when they are on the go they are much faster than you would think. And there are two species of sloths in the rainforests of Costa Rica: The two toed sloth, nocturnal, with a flatter snout, bigger round eyes and a clay colored fur. And the three toed sloths, they are the ones that seem to have a smile on their face, diurnal, smaller eyes and males have a distinctive mark on their backs. They are leaf eaters… and only the ones that ehir stomachs can digest (Not all leaves or flowers can be food).

8.Poison Dart Frogs: They are tiny, noisy, and super colorful! Amazing little gems in red, turquoise, yellow and blue. They are only poisonous if you eat them however some of them can be really elusive, while others are much easier to see at the bottom of the trees calling for females, knowing that they are not pray for anyone who wants to remain alive.

I would like to mention in a separated note the trees of the Costa Rican rainforest. Their biology is simply breathtaking, not to mention their massive size and presence. And even though they might not be as popular as… say sloths… They are an astonishing thing to behold! 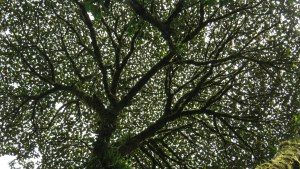 You may see several of these animals in a zoo… yes. You might, but going on a trail surrounded by the luscious life of zillions of plants, shrubs and trees and suddenly stopping at the sound of something moving is, probably one of the easiest and most magical experiences to live while traveling. There is a certain in

nocence and fantasy around these creatures, that are not looking to be recognized or even seen, who simply live the present moment and thrive through it.

So many species, animals and marvels to see, that the experience will  last for ages in your mind.